Well today is a new day and my roller-coaster ride seems to be slowing down. Quite frankly, I hope it stops for a while. I mean, I really like roller-coasters, but I just need a freakin' break here, OK? Actually, the older I get, the LESS I like roller-coasters, something about facing your own mortality and all that, but I digress. Things seem to be falling into place, as they tend to do.
Funny how things happen - Jeremy happened to be home from work yesterday because there was thunder and lightning in New Hampshire. Yes, I know - thunder and lightning? Well, when you work on top of a 300-foot-tall windmill that is basically like a giant lightning rod, they tend to evacuate the premises when lightning appears anywhere within a 60-mile-radius. Thank God. So Jeremy was home yesterday. Yesterday was our appointment at the school that we were looking at for Trev, it's called the Goddard School and it's part of our public school system, but it's actually in another town. So I was thankful that Jeremy was home, so he could come with us.

Trevor was very upset about even going to look at it - he said he wanted to stay at Burncoat and if we made him leave he'd run away, he'd quit school, etc. But when we got there and sat down with Suzanne (a clinician), and she explained to us how the school works, I could see him loosening up. She explained that they earn points for staying in their area, doing what they are supposed to do, and treating their peers with respect and kindness. If they do all that, they have free time every day when they can listen to their iPods, play pool (they have a pool room), hang out with Gus (an adorable golden lab therapy dog), and just hang out with their friends. We went on a tour - and Trevor had a chance to see the kids in the classes - almost all of them looked like him. You see, the classroom he's in now is for kids on all levels of the autism spectrum. And you have to understand that we didn't find out Trev even HAD Asperger's until early this year - so he was 14 1/2 years old. He didn't really accept the diagnosis, because like any teen, his initial reaction was "there is NOTHING WRONG WITH ME." It's hard to explain to him that Asperger's is a form of autism when he shares a classroom with severely autistic children, and he sees that they are so very different from him, and he's right, they are. And so I think he pictured this school as a bigger version of his classroom - with severely autistic children the majority, and kids like him on the high-functioning or Asperger's side of it, as the minority.

But this school is not a school for autistic kids. It's a school for kids with emotional and social problems - and most of them happen to have those problems because of Asperger's, but some don't. And most of them have been through the same types of things that Trev has been through, and their parents have been through what I've been through! Each classroom only has 10 kids in it, and the classes are Math, English, Science, Social Studies, MCAS preparation, Art, Music, and Gym. Their school day goes from 9-3 and he would get door-to-door transportation - I like that because it means he'd be getting home right before me. He'd have to make sure he got up and on the bus in the morning, though, because I leave for work at 6:50 to drop Cassidy off at school (him, too, right now). On Thursdays, they have early release day and they get out at 1:00. Because it's a part of our public school system, he can still participate in certain things - they think it would be fine for him to do the snowboarding club, which he loves and does every year. And it would work out perfect because snowboarding is on Thursdays - so I could pick him up from school on my lunch break and drop him off at Burncoat and he could take the bus up to the mountain with the other kids. Then he'd get the bus back to Burncoat at night and we'd pick him up there. Once we had the tour and Trevor heard this information, he had really come around. Suzanne asked him, "So what do you think, Trevor, are you willing to give it a shot?" and he smiled and nodded his head and said, "Yeah." I was thrilled to hear him be willing to try it out - I had already pretty much made up MY mind by then, but I knew it would be a nightmare if I had to fight him over it or force him to try it.

So - as you can tell, I am already kind of excited about this. Suzanne said she'd fax the special ed chairwoman her recommendation that Trevor go there - there are only 2 slots left, and she was pretty sure that one was in a room that Trevor would feel comfortable in. Most likely, he'll end up there as early as next week. I am really optimistic and would appreciate all of your thoughts and prayers with this. This kid deserves a school that treats him with kindness and respect AND provides him with the education that he needs and has a right to. He wasn't happy to hear that they DO get homework (he doesn't now), but he knows it will be good for him. Keep your fingers crossed for us. Suzanne also assured me that the principals at this school do NOT call you over every little thing, and that the teachers and clinicians deal with stuff for the most part and keep it in school. Only if the kids have a real big problem does the principal get involved. She asked Trevor if he had any questions and his only question was, "are there a lot of fights here?" She said "Nope - I have worked here for a few years and there has NEVER been a fight." I think that might have been the deciding factor for Trev. I think he is sick of having to go to school prepared for a fight every day. What a crappy way to have to spend your day, huh? Waiting for someone to come up behind you and punch you in the head? Jerks. Let me tell you, if I didn't believe in fate, karma, and God, I would not be able to sleep at night without kicking those little punks' asses myself. But I know that they will get what's coming to them, eventually. Children who are bullies and scumbags usually grow up to be grownups who are bullies and scumbags, and that is punishment enough, I guess. I just want MY kid to be safe and happy.

OK so I wanted to share this picture with you, just because I love it. It's me and my friends Amy and Missy. Amy will never see this, because she doesn't even have an E-MAIL ADDRESS! OMG - can you even BELIEVE that? I cannot. I gasped for air for 10 minutes when she told me that. She was like "What? WHAT? Are you OK?" and I was like "What the hell is wrong with you? How can you not even have an e-mail address???" Poor girl. I don't know how she makes it through a day without MySpace and blogging and e-mailing and online shopping and, and, and, and..... *sigh* OK I was doing it again, I was hyperventilating! So anyway, this is us, and even though she doesn't have e-mail, I LOVE Amy cuz I have known her practically since she was born. And yes, Missy, I love you, too. Since I was about 20. hee hee Don't we look fantastic for a bunch of old ladies? ;o) LOL 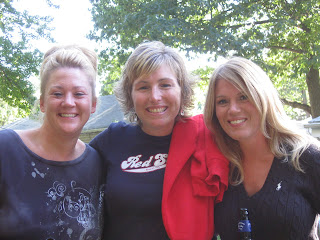 That's all for now, I'll keep you updated! Peace!
Posted by Jenn Borjeson at 5:45 PM