Remember being a teenager?

Do you remember being a teenager? I mean, do you REALLY? Do you remember how exasperated you felt when life didn't go your way? How you truly believed that LIFE SUCKED because you were grounded for a weekend? Remember thinking that your parents JUST DON'T GET IT?!? hee hee You know what? I truly do. I truly remember feeling that way, and I think it pisses my own kids off even more when I giggle and go, "awwww.... I remember saying that exact same thing!" LOL

I know I have talked a lot about the challenges that my teenagers provide, but I am truly blessed. I would rather have the problems and issues that I do have, than the ones I could have, KWIM (know what I mean, for future reference)? Let me tell you about ME as a teenager. Here I am at age 15, which also happens to be the age I was when I had sex for the first time - not that I had ANY business having sex, but my friends had done it, so I had to do it, too, right? No one really talked to me about sex, I can honestly say that I had no idea about anything - I mean, I knew HOW it was done, but no one ever had the "sex talk" with me. No one ever told me that you should wait until you're married or at least in love. You see, my mom was a total opposite of me and never even dreamed that it would be an issue at 15 years old. Yeah, look at me - I'm so angelic, am I not? 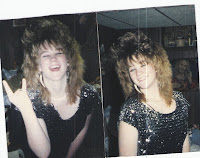 Please note the handcuff earring hanging off one ear, and the Bon Jovi tusk-thing hanging off the other. And yes, I believe that was some type of Motley Crue devil sign I was flashing. I had no idea what it meant, I just thought I was cool. Here I am again, lower-left corner, that awesome jean jacket I had on was signed by the members of Poison. God, I was so cool. *sigh*

Right around this time, my father had left our family and we found out that he was a cocaine addict with a heart problem worsened by his addiction. I refused to speak to him. My mom had to get a job working nights, third shift, because it pays the best, in order to support herself and her 3 children. One night when I was about this age, my cousin Angela (who is also one of my BFF's and has been since we were in diapers), decided in our infinite wisdom to sneak out of the house after my mom had left for work and go to meet a boy who I had a crush on. It was a good mile or two away, in a not-so-great-area of the city. On our way back, it was probably about 2:00 in the morning, and we saw a cop driving up the street. We hid in the bushes, because we were afraid of getting caught being out so late without permission. The cops thought that we were staking out houses to rob and had their flashlights aimed at us and PULLED THEIR GUNS OUT demanding that we make ourselves seen. When the 2 of us little girls came crawling out of the bushes, they had to restrain themselves from laughing. They wouldn't give us a ride home, either. LOL They scolded us and sent us walkin' home. This is me and Angela a few years later, when we were about 19 and 20: 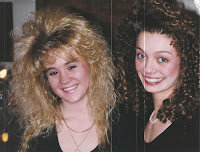 I know Angela is going to be thrilled to see this picture of herself on my blog. hee hee Now that we are moms - me of teenagers, her of little ones, she sneaks over here some Friday nights with a stock of Grape Smirnoff's while my kids are either out or hiding in their rooms and hers are home with her hubby, and we look at old pictures and talk and laugh, and it's so much fun.

My point in all this - my kids are good kids. They are 13 1/2 and 15 years old and so far, the only trouble they've given me is back-talking and Trevor's "social" issues, mostly caused by Asperger's. I really am lucky - but not really. I think it's more than luck. I think I am a pretty damn good parent, actually. Cuz you know what? It is NOT easy. There are days when I wish I could quit. Days when I cry and feel like giving up. But then I take my 15-year-old boy to TJ Maxx to get some new pants, and out to lunch, and on the way home he says "Hey mom, thanks for today." Then I go to say goodnight to my 13 1/2 year-old girl and she asks me to rub her back and tells me about what is going on with her friends and school. And I listen to them. And they know I am here for them, always. And I hope that they never, ever forget that. And as I type this, that sweet little girl is irritating the crap out of me. ROFL *sigh* I love being a mom, more than anything else in the world. I just have to keep repeating that to remind myself every now and then.... hee hee