Update on Jeremy's dad and life stuff below card.

I was finally feeling in the mood to stamp today, so I made this card for the

and even though I didn't get it posted in time, I did follow the sketch for the 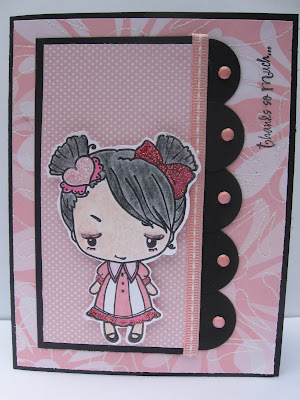 With all of the kindness that's been shown to my family and myself over the past few weeks, I figured I should stock up on some thank-you cards! This is Miko from the Greeting Farm's Roll Call kit. Cardstock and DP is SU! in Pretty in Pink & Basic Black. Pretty in Pink brads from SU and assorted ribbon from my stash.

Now for the update: these last few weeks have just been some of the most awful of my life. I have experienced such a wide range of emotions and discovered that tragedies really do bring out the best in most people. I have felt such love and support from so many people during this, and it really and truly has helped us get through it. There were several days when I just could not stop crying and I remember thinking "How can a person just never stop crying? Don't you run out of tears eventually?" Well, those tears haven't quite stopped yet but they have slowed down and now there are even breaks between the tears - whole hours that go by! And that's thanks to the friends and family who have been there for me and my family in any way - whether it was bringing us food or giving one of us a ride somewhere or just plain being a shoulder to cry on... just making us feel loved.

On Tuesday night, we had the calling hours for Richie's wife Maryann. It was sad but beautiful at the same time. So many people came through the line, which was a wonderful tribute. There were gorgeous flowers everywhere, and lots of beautiful pictures. Richie was unable to attend, as he was still very heavily medicated and had chest tubes in. It was awful for him to not be able to attend, but there was a special book put out for people to write messages to him so that was nice. He had hoped to attend the funeral the next day, via ambulance, but the doctors again said no. He told Jeremy "Pick me up out front tomorrow morning at 9 - they can't stop me, I'm going." It was cute and heart-breaking at the same time. Jeremy's sister Brittney video-recorded the funeral mass at the church for him, so he could at least watch it. It was just a sad, sad week.

Having supportive family and friends is just such a godsend in situations like this. This is what life is about...being there for each other. I'm so very thankful for having such a great support system.

Richie is going to have a long road of recovery - they expect to move him to a physical rehabilitation place within the next week. We are guessing he'll spend maybe a month there, but we are not sure yet. During the past 2 days, they have significantly reduced his pain meds and he's starting to come back to himself, not hallucinating so much and stuff. They were worried about his liver for a while, as he was VERY yellow, but that started to improve as well, so that's a blessing. Gotta take the little blessings where you find them in situations like this, right?

Today is Saturday and I am off to a wedding shower for my cousin Nick's fiancee Aimee. I am driving with my sister, my cousin, and my mom - it should be fun. It's really the first "event" I am going to since all of this started, so it will be nice to get out of the house for something fun.

Posted by Jenn Borjeson at 7:53 AM