Even though I always say stamping is like therapy for me, and it really is, I do find myself unable to do much stamping or card-making when I'm really upset or depressed. I guess it's because even though it's therapeutic, I also truly enjoy doing it. And it's hard to do stuff you enjoy, it's hard to take pleasure out of anything, when you're grieving or sad or having a melt-down, you know? But I finally made myself sit down in my stamp room today because I had to make a few thank-you cards for the many people who've been so kind and helpful to us over the past few weeks. So I managed to make a few cards for challenges this week, and it really DID feel good.

This one is for the Sugar Bowl Sketch Challenge 36 - optional to use the theme of pink, black, and white, which I did: 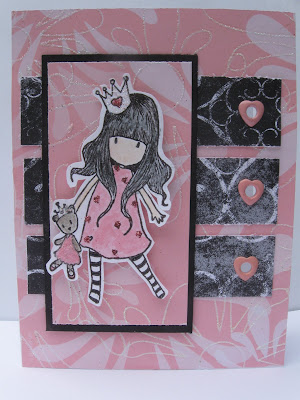 I used an adorable Gorjuss Girl stamp from the Sugar Nellies line. Cardstock and DP are by Stampin' Up in Pretty in Pink, Whisper White, and Basic Black. Glitter and heart-shaped pink brads also by SU! Image colored with SU! markers and Prismacolor colored pencils blended with Gamsol.

Jeremy passed his test! He is no longer an apprentice - he is now a journeyman iron worker. I am so very proud of him!

So Jeremy wanted to tell his dad that he passed, so him and I took the kids up the hospital last night and had a little visit - Richie was very heavily medicated and was having some delusions again. He was making us laugh, actually, which was nice. He doesn't know it, obviously, it's just the medication talking. He has true moments of clarity where you can actually see him working hard in his head to bring himself to a point where he can have a brief, clear conversation with you... it's just heart-breaking because you can then also see him have to give up and let the medication take over, it's just exhausting for him.

Jeremy and I were walking in this morning to visit when the hospital social worker called to say that Richie won't be able to attend the calling hours for Maryann tonight. It was really sad to hear that, but we certainly don't want to jeopardize his health. We know that everyone did everything they could to try to make it possible for him to attend, and there's still a slight hope for tomorrow's funeral. Anyway, when Jeremy told him that he couldn't go, they talked about it for a few minutes and Richie said "I understand, I understand the reasons." Then at the end of the conversation he said "Well if it's gonna rain, it's gonna rain. What can you do? They won't let me have a phone in here." And tears just started running down my cheeks, cuz it was just so heart-breaking... that's the only word I can use, I know I keep saying it over and over again, but that's what it feels like, like our hearts are just breaking. My biggest concern right now is that once we've had the funeral and we all start to get over the shock of it all and move on with our lives - he'll just be getting into a condition where he's beginning to understand the reality of what's happened and it's going to be almost as if it just happened - for him, anyway. I know it's going to be a really long road, and we are fully prepared to be there for him in any way we can.