So happy March - we are supposed to be able to look forward to flowers blooming and tree buds blossoming, right? ha ha ha Today, we woke up to another snow day thanks to a fresh foot of snow that fell last night. Working for a college, I don't mind snow days at all - I don't have to make them up! My poor kids, however, are working on weeks of "extended days" to make up for the ridiculous number of snow days we've had this year. Enough is enough, Mother Nature!
About a month ago I wrote a blog about my old friend Tim, who I went to my junior prom with. I wished I had a new picture to put up next to the prom one. Well, my wish came true when we went out again a few weeks later to my friends' parents' anniversary party and my friend Melanie had her camera. Here is the prom picture again: 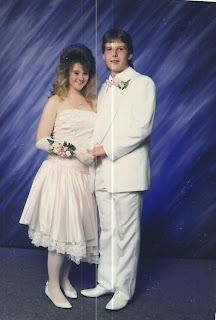 And now here we are, um, exactly 20 years later (the pic above was in the Spring of 1989), this is Tim's wife Shannon, Tim, me, and my husband Jeremy: 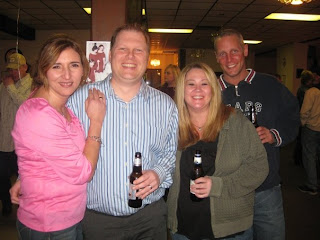 Not only do I adore Tim and I'm so thankful to be hangin' out with him again, but I also LOVEY Tim's wife Shannon. It's always nice when you meet up with old friends and totally hit it off with their spouse, isn't it? For me, it's especially nice because most of my old friends are guys! You know how some people you meet you just know you're going to become good friends with? That is how I felt about Shannon, and I was right. I think everything happens for a reason, as you all know, and I'm so thankful to have met Shannon! So anyway, this is Shannon, me and Melanie, pretending to be Charlie's Angels. Hey, we had fun: 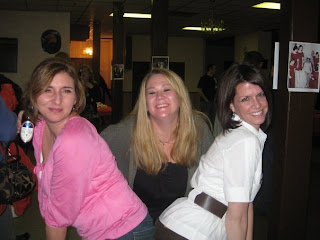 Mel is the little sister of one of my oldest friends, Kevin. You will not hear me call them Melanie or Kevin very often, it's just Kev and Mel. When we were REALLY young, like 14/15, Kev and I hung out at "the park". One day we were sitting on the bleachers and someone said they had a headache, so I offered them an aspirin. Kev was known to be, uh, sensitive - he was standing kind of far away and thought I called him an asshole. It became a joke that has lasted for more than 20 years - every time I see him, he hugs me and says "Hey aspirin!" hee hee :o) This is me and Kev, Mel is taking the picture saying "Say aspirin!" ROFLMAO I love old friends and memories, this is what life is all about, you know? 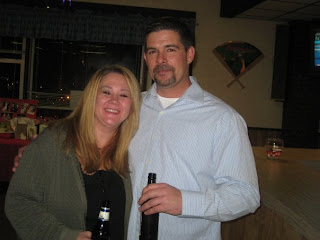 My hubby and I: 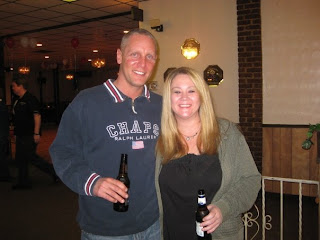 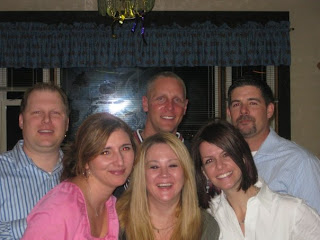 I love the Internet. I've been online for 10 years, but many people are just getting addicted now. Thanks to Facebook, I have reconnected with a ton of old friends and we have all started talking more and making an effort to get together and get our social lives back. My almost-14-year-old daughter has been making fun of me - when I told her we were going out next weekend she said "Mom! You are OLD - you are not supposed to be a party animal." (Says the girl who stays out later than we do.... LOL)

It's not about going out necessarily, but more about having a life outside of home, work, repeat. You know? Lately, Jeremy and I have been going over to Missy & Dan's or Timmy & Shannon's house (you'll always be TIMMY to me, Tim, sorry! hee hee) and playing pitch. I love doing that stuff - just getting together and talking. Talking about old times, our children, the future, our families. Many of my friends have small children, but mine are teenagers now and able to be left home alone for a few hours - often, they have their own plans! It's nice to not have to worry about babysitters and stuff anymore.

This afternoon I am going with Tim to attend the wake/calling hours of an 18-year-old young man who is the son of friends of ours from high school. He was diagnosed with brain cancer not too long ago and he passed away last week. They are a very religious family and take a lot of comfort in their faith, so I am thankful for that. Please keep their family in your thoughts and prayers. Thank you. Peace.