Time - ohmygod - it just, like, FLIES by! Seriously, I cannot believe a week has gone by since I've posted. OK - so it was a whirlwind of a week. The elections were Tuesday - Jeremy and I went to vote right at 7:00 a.m. when the polls opened - because I work 7:30-4 and he had school until 7:00 p.m. that night. We waited in line for 45 minutes, I didn't even mind waiting. Tuesday night we went to bed pretty early, as usual. I woke up at around 1:30 a.m. and felt a migraine coming on. I took some ibuprofen and went back to bed. Woke up about an hour later with a full-blown migraine, throwing up and everything. It was awful. It hurts so bad, you can't sleep. So I lay there for a few hours just rubbing my head and whimpering. Jeremy got up at 6 to get Cass up and off to school. I called in sick to work and I stayed in my pj's all day, on the couch. I finally started feeling better in the afternoon - but then after the migraine starts to get better, I always feel like I have a hangover, it's such a gross feeling. I have not been getting a lot of migraines since I lost weight last year, which I am thankful for. I think the fact that Halloween was last week and I had access to tooooooo much chocolate had something to do with it. My migraines are definitely affected, and often brought on by, my diet.

Oh - OK - the election - we woke up and Trevor had made signs in the middle of the night declaring Obama the President of the United States. We were cracking up. It was nice to see him get interested in something on TV besides South Park. LOL Actually, everything went the way that I voted, what a nice feeling. The last few elections had left me sorely disappointed. I actually have hope for the future now.

Trevor's principal called me the other day - I really love this school. She was so nice - she said that they had put Trevor into a homeroom to start out that was some 9th grade and some 10th grade kids, a lot of them are "young" emotionally, socially - so she thought that Trevor would be better off in a different homeroom, one with kids who are 10th and 11th grade (Trevor is 10th), with more mature kids with better behavior for Trevor to model. She also said that he was so bright, she felt he wasn't being challenged enough in the "younger" class - but asked me not to tell him that part of it. I was cracking up, I totally agreed with her. So when I got home and asked him what he thought of it, he was fine. The next day, when he came home, he said he loved it - even more than the one he left. I thought the quick change might be hard for him - I should have known better - he's always so resilient, this kid.

I made some more cards! I've been selling lots of cards lately, which is great - I love to be able to make a little bit of Christmas shopping money by doing something that I totally love to do. I am going to my cousin's baby shower tomorrow, and for her gift I made her this really cute set of cards, 15 "thank you" baby cards, and 15 "birth announcement" baby cards. And I had this box for the cards that I re-covered in designer paper.... can't show you yet, in case she happens to read my blog. hee hee But I will share those later on in the week. Here are the cards I loved the most: 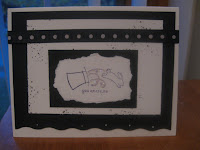 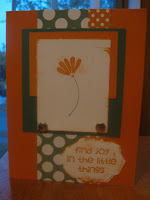 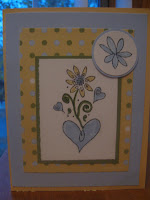 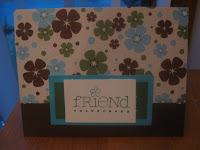