This is my friend Dan - aka Diesel Dan (he drives a truck delivering oil), aka Dan the Man (self-explanatory). Dan was mad at me because I neglected him in my previous blog entry. See the entry below titled "Gotta Love Vacations" - I talked about "my friend Missy and her husband..." as if he doesn't even have a name. I'm a bad friend. But be careful what you wish for, Dan, cuz now you have your very own blog entry all about you! So this is Dan - Dan likes to fish, but I think this weed here is his biggest catch of the season: 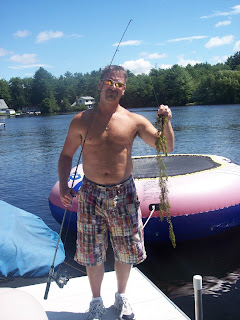 Thanks to Missy for sharing this picture with me - Dan will be thrilled to see this. hee hee "Daddy, why are you wearing mommy's shorts?" ROFL Oh, the ammunition that this picture provides, it's practically priceless.

My husband Jeremy grew up in West Boylston with Dan and Missy, so he's known them, like, forever. I met them all when I was about 20, after breaking up with my high school boyfriend - I actually had a crush on Dan before I started dating Jeremy. (hee hee) Dan and Missy dated when they were in high school, then broke up for a few years - but they always belonged together and ended up getting married and having 2 of the most precious, adorable little girls you have ever seen in your life. I mean, just LOOK at these little q-t pies: 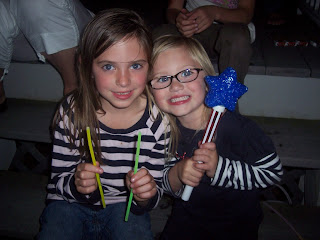 I know, don't you just want to squish them?


Anyway, Dan is hysterical. He totally cracks me up. He's just one of those people that makes you laugh without even trying. Every stinkin' time I see him, I end up with a stomach-ache from laughing so hard. Now I originally had tried to post this blog entry yesterday, but the site was down. I truly believe that everything happens for a reason, and I have to say that I am glad I wasn't able to post this yesterday and here is why: yesterday was my sister's birthday, and mine was 3 days ago. We always celebrate together, so we made plans to go out last night with our husbands and Missy and Dan (I will NEVER again resort to "Missy and her husband" - damn it, he's not just Missy's arm-candy! He has a name and I will use it!).

We went out pretty early and we had a few drinks, obviously (well, it will be obvious in just a minute). We went to a few different places, and we were having a blast. Missy didn't bring her pocketbook, she only brought her wristlet -which is different from a clutch and if you want to know the specifics you will have to ask Missy because as far as I am concerned, they are all just pocketbooks - but I digress. Missy brought her wristlet, which is basically a wallet with a strap. Dan's keys wouldn't fit in it, so he asked Michelle to hold them. When it was time to leave, Dan asks Michelle for his keys. She hands them to him. Dan points the electronic car-opener at the car and hits "unlock". Nothing. He walks all around the car, pointing and clicking away. Nada. He starts to get aggravated and thinks maybe the electronic fob-thing is dead, so he gets the actual key and tries to unlock the door. Nope, won't budge. Dan starts swearing and saying things like "What the hell? It's like it's not even my car!" In the meantime, I am laughing hysterically and calling AAA to get someone to come let them in this car and see if the key will turn the ignition. As I'm placing the call, Dan starts yelling "Never mind, hang up the phone!" - him and Michelle realized after a good 15 minutes that she had handed him HER car keys - ROFLMAO I almost peed my pants I was laughing so hard. I kept repeating, "It's like it's not even my car!" Well, it was your CAR, Dan, but not your KEYS! hee hee


So Dan, you are now officially mentioned in my blog, and I hope you are happy. I am publicly apologizing and I promise you will forevermore be mentioned by name. Be careful what you wish for..... BWAHAHAHAHAHA (evil laugh, say it out loud and with menace - there you go!)
Posted by Jenn Borjeson at 9:24 AM