Holy cow - I'm a bad blogger! I cannot believe it's been almost 2 weeks since I posted. Can you tell I went back to work? LOL I mentioned my promotion - my title is Bursar, it's the same thing as "Director of Student Accounts" - I'm in charge of bringing the money in. I love my job, but it's been a WHIRLWIND! Let's just say that the person in the position before me made things as difficult as possible for anyone who would come after her. But I've been working at this College for 4 years now,in the same department. So although it's been challenging, it's certainly not impossible. And having her gone has changed the atmosphere - people are more at ease, she made a lot of people miserable and tense. That's going away now, thankfully.

Trevor turns 16 next week. I cannot believe it. He wanted a longboad skateboard for his birthday, so we ordered one online today from Dick's Sporting Goods. They were on sale, plus I found a coupon code by searching online, I ended up paying $80.00, including shipping, for a longboard that normally cost $120.00. Not bad, eh? Trev is supposed to be going to California to stay with his Gramma Dori (Jeremy's mom) for the first 2 weeks of August. He's gotten so tall and big, that I'm not half as worried about him as I was when he went 2 years ago. I am going to have to bring him to get his learner's permit when he gets back, too. Unbelievable, I cannot believe my first-born is going to be driving. *sigh*

Cassidy is having a nice Summer, at least I think she is. I hardly ever see her, my little social butterfly. LOL She has made friends in the neighborhood, so hopefully she won't be as nervous about starting high school at the new school in the Fall.

I haven't done much stamping, but hope to squeeze some in this weekend. The sun has been such a rare occurrence around here that when it is shining, I'm out there soaking it up! Here is one card I made, just playing with a stamp that I rarely get to use, Stamping Bella's Togetha Forevah: 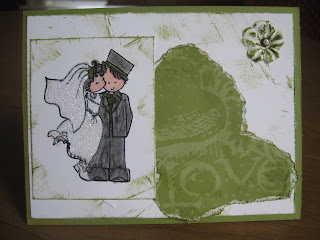 Have a lovely weekend, hope you are all enjoying some nice weather! Peace.
Posted by Jenn Borjeson at 2:12 PM